JR presented 12-1999 with concern regarding a space occupying mass in the upper left margin of her left breast, accompanied by a faint bruise like discoloration which had been present for six months over the site of concern.

JR had been to a breast screening service in June 1998, and had undergone mammographic and sonographic investigation of the mass, and was asked to represent in 24 months after clearance.

Her thermal images of 12-1999 highlight a thermal asymmetry of approx 2.2 degrees Celsius. 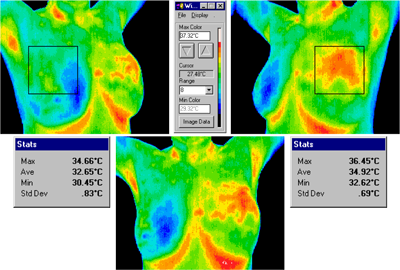 JR’s report contained a recommendation to seek a physician’s opinion immediately due to the physical finding of an asymmetrical space occupying mass coinciding with the noted asymmetrical thermal phenomena’s epicenter.

After consideration of the previous examinations, thermograms and in light of a physical examination, Dr P, referred JR for a diagnostic sonographic and mammographic series, which proved positive to a space occupying lesion consistent with a “probable large carcinoma involving the upper half of the left breast”. This was later confirmed by FNA.

A decision was made to use chemotherapy to reduce and possibly consolidate the tumor prior to any surgical attempt.

Two months after chemotherapy (2-2000), JR re-presented for a follow on series of thermographic images. The thermal asymmetry between the breasts had fallen approx one whole degree to have a thermal asymmetry reading of approx 1.2° C. 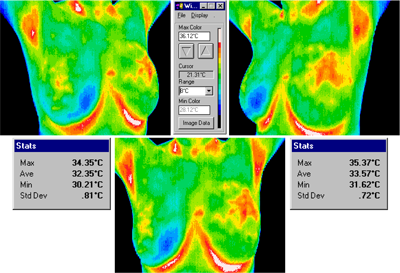 Late in March 2000, JR came in for her third comparative series of images, and was scheduled for surgery two days after this series. The surgeon was highly encouraged by her response to her last, and fourth chemotherapy series, and was undecided as to the extent of surgery that was to be performed, which would be determined by frozen section during the surgery.

As the reader can see in this, the last set of images in this study, the thermal asymmetry had over the intervening six weeks since the previous series fallen to approx 0.4° C. 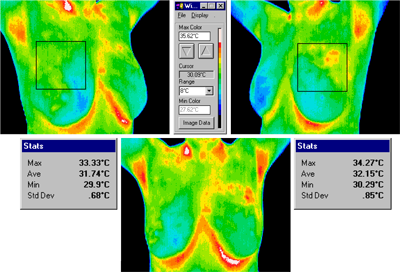 Conclusion – What this study demonstrates: