Controversy and disbelief by the medical profession has been associated with fibromyalgia simply because objective evidence in the form of x-rays or biopsies can’t be found. However, with the use of thermography, or the measuring of heat produced by areas of the body, this syndrome is now more widely accepted by many, but not all, doctors.

What is Fibromyalgia?
Fibromyalgia (fibrositis, myofibrocytis) is a chronic, painful muscle condition characterized by pain in the skeletal muscles, tendons (which attach muscles to bones), ligaments (which attach bones to bones) and other and bursa (sac-like structures which are filled with synovial fluid and provide lubrication and nutrition to joints). Recently, much has been written about this disorder in health magazines and newspapers. Although Hippocrates first described fibromyalgia, it has been only in the last few years that much attention (and credence) has been given to this syndrome.

Symptoms
Fibromyalgia is characterized by generalized muscle soreness and stiffness lasting more than three months, poor sleep with morning fatigue and stiffness, tenderness at 11 of 18 specific sites, and normal blood test results. The more common painful areas are the low cervical spine, the shoulder, the second rib, the arm, the buttocks and the knee. These symptoms are often worsened by stress or a change in the weather. Depression, which may be due to a chemical imbalance in the brain or the development of chronic pain, is common with fibromyalgia. Virtually all physical activity not only increases the patient’s pain complaints, but also makes the next few days miserable, producing intense muscle pain. 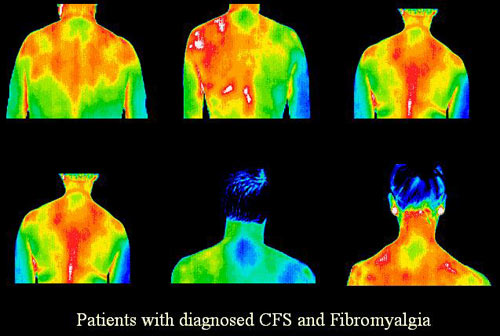 Causes
Fibromyalgia may be caused by physical trauma (such as a motor vehicle accident, a sudden fall, or even the trauma of surgery with a general anesthetic). This terrible disorder may also begin after an illness like the flu. Often, women experience the effects of fibromyalgia due to hormonal changes after a hysterectomy or around the time of the beginning of menopause. Also, the sudden emotional trauma of the loss of a loved one may trigger fibromyalgia.

Many “experts” feel that fibromyalgia effects only those people with “Type A” personalities, but this notion has not been demonstrated either by statistics or by scientific experimentation. It may plague people with all types of personalities and life styles, all age ranges, and those in all states of health. However, many of those suffering with fibromyalgia also suffer with TMJ.

Treatment
Treatment of fibromyalgia is physical therapy, trigger point anesthetic injections, stress management, non-steroidal anti-inflammatory drugs, dietary changes and antidepressant drugs, especially at bedtime. Recently, there has been a lot of research concerning the use of herbs and homeopathic remedies (eg, Vitamin C, Rhux Tox 6x, melatonin, magnesium, and many others) in the treatment of fibromyalgia. An excellent article addressing this and other issues about fibromyalgia appeared in the January 1996 newsletter of the USA Fibromyalgia Association (details are given below about the Association). Physical exercise, proceeded by stretching and followed by application of ice, is very beneficial. One of the worse things a sufferer of fibromyalgia can do is to become sedentary and inactive. You’ll only gain weight, become depressed, and lose all desire to participate in life.

TMJ & Fibromyalgia
Many sufferers of fibromyalgia also suffer with TMJ problems. In fact, each of these disorders make the other far worse than they’d be alone. When one or both TMJs are injured, the muscles in the head and neck automatically tense-up, develop trigger points, and, among other symptoms, intensify the symptoms of fibromyalgia. Unfortunately, many doctors who effectively treat fibromyalgia do not under-stand or recognize TMJ and visa versa. Also, many patients suffering with TMJ have been misdiagnosed as having fibromyalgia.