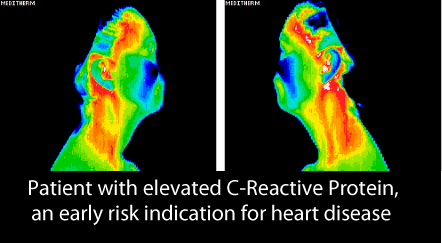 The Heart’s Thermoscape
Thermography also has clinically valuable applications as an early-warning indicator of heart disease, notably atherosclerosis, before it produces a devastating heart attack or stroke. A thermographic image shows us clearly the areas of diminished energy and blood flow.

For example, if one finger on a patient is a different color on the thermographic image from all the other fingers, then there is probably a blood flow problem to that finger. This in turn suggests there may be a constriction in the artery serving the finger and thus a problem worth attending to.

In effect, the patient becomes his own control; you compare the differences in heat emission and circulatory quality on one side of his body against the other. We establish baseline areas in the body where atherosclerosis is almost unknown. You rarely see it in some of the blood vessels at the base of the shoulders which means you can take heat emissions from this area as the healthy norm for that person.

Over time, we have developed models of healthy heat emission patterns which we call the thermoscape. When we see disturbances or deviations in this we know something is abnormal. When there is a restriction of an artery, 90% of the time it is due to atherosclerosis.

With atherosclerosis, the thickening and hardening of arteries, thermography enables us to see the progressive deterioration of the flow of infrared energy along the course of a narrowed artery. In this way, you can see evidence of restrictions of blood flow in specific arteries serving specific body areas and know that a heart disease process is underway, and you can take corrective action before disaster strikes. objective studies as early as the 1970s showed that, of existing technologies, thermography is the most sensitive (98%) and accurate (96%) noninvasive indicator of heart disease. We are able to establish in a definitive, non ambiguous way clinical evidence about a patient’s cerebrovascular system. There are no drugs, radiation, dye injections, stress, or risk to the patient.

Let’s look at how thermography helped Henry, 65, avoid a third cardiac bypass surgery and, quite possibly, death from a major heart attack.

Preempting Another Heart Attack
When Henry was referred to us by his physician for thermographic imaging, he had already undergone two coronary bypass surgeries to relieve his angina, or heart pain. The first bypass lasted six years, the second wore out after barely two years. Tests showed that Henry’s coronary arteries were blocked again, despite the successive bypasses. This did not surprise us at all.

Bypass surgery for heart disease accelerates the heart disease process. The cause of atherosclerosis is not high cholesterol; it is usually a response to an injury, such as oxidative stress from free radicals. This means toxins in the blood (free radicals), derived both from inappropriate food choices and the normal results of metabolism, cause injury and functional havoc (oxidative stress) in the body’s cells and tissues.

The process of atherosclerosis has two parts. First there is the actual scarring of the artery (from oxidative stress and free radical damage) as it thickens with fibrous and fatty tissue lesions. Second, a matrix of calcium and oxidized cholesterol, known as plaque, forms over this lesion.

Quick Definition: A free radical is an unstable molecule with an unpaired electron that steals an electron from another molecule and produces harmful effects. Free radicals are formed when molecules within cells react with oxygen (oxidize) as part of normal metabolic processes. Free radicals then begin to break down cells, especially if there are not enough free radical uenching nutrients, such as vitamins C and E, in the cell. While free radicals are normal products of metabolism, uncontrolled free-radical production plays a major role in the development of degenerative disease, including cancer and heart disease. Free radicals harmfully alter important molecules, such as proteins, enzymes, fats, even DNA. Other sources of free radicals include pesticides, industrial pollutants, smoking, alcohol, viruses, most infections, allergies, stress, even certain foods and excessive exercise.

Slicing into an artery with a scalpel to graft on a new piece causes great irritation and damage to the artery; the bypass surgery itself creates the site for the next accelerated emergence of atherosclerosis. Angioplasty, which involves the inflation of a miniscule balloon within an artery to mechanically widen it, also imparts stress, damage, and local irritation to the linings of the arteries and can similarly start an atherosclerotic process. As an artery’s ability to handle blood flow volume diminishes, more scarring and damage to its membranes result, and the risk of an acute blood clotting episode increases. It is the clotting of platelets (red blood cells) that causes a stroke or heart attack.

This is why conventional medicine prescribes aspirin or Coumadin: both thin the blood and inhibit clotting.

Aspirin, for example, takes a heart disease patient away from the knife edge of attack or stroke but should be used only as a short-term palliative. Henry took aspirin for a while to give the chelation therapy (see be-low) more of an opportunity to work; then he discontinued it except for relief from the occasional head-ache.

Bear in mind, the entire body is highly traumatized by open-heart surgery; you are put under deep anesthesia and practically split open like a melon. This procedure – it’s considerably stressful, painful, debilitating, and exceptionally expensive – requires a long recovery and generally cannot be repeated more than twice without enormous risk and because you have likely run out of suitable blood vessels to graft.

Bypass surgery does absolutely nothing to change the course of the disease. This type of highly invasive surgery provides only a temporary mechanical improvement in blood flow. Unless the patient radically changes his lifestyle and diet and undertakes targeted nutritional supplementation and chelation detoxification, the arteries will quickly clog up again, as did Henry’s.

His heart pain had returned and he was ready for an alternative approach. Henry had a moderate degree of thickening in the left carotid artery, the major blood supplier to the head. Thermographic imaging showed us that blood circulation into Henry’s head was already diminished; we also discovered he had extensive atherosclerosis in both legs.

Based on our analysis and the clinical information, Henry’s physician recommended that he undergo chelation therapy to detoxify his system and improve his blood circulation. Henry had 45 chelation infusions at the rate of two per week. He also made some changes in his diet and lifestyle: he exercised more, ate more fresh organically raised vegetables and fruits, reduced his meat and salt consumption, and stopped smoking. Generally, a low-fat, high- complex carbohydrate diet with limited amounts of chicken and fish is advisable here. I also suggested that Henry take high doses of vitamin C (5 g daily in divided doses). Folic acid and vitamin B12 are also helpful in rebuilding arteries.

The treatment goal was twofold: first, quit damaging the arteries and allow them to heal naturally; and second, provide the arteries with proper nutrition to rebuild themselves. With this approach, we have been able to help people defy the usual model of heart attack/die, stroke/become a vegetable by doing nothing more than what should be the state of the art for cardiovascular treatment.

When we examined Henry after the treatment, he reported that his angina had disappeared; in fact, he said it had abated after only ten chelations. Thermographic imaging documented that there was a marked improvement in blood circulation through the left carotid artery; this result also confirmed the success of the chelation therapy. His arterial restriction was reduced from 85% to less than 20%.

Anything less than 20% restriction is considered minimal and therefore non problematic. Technically, you can find traces of atherosclerosis in nearly anybody. The rate and extent to which it develops (if at all) and the arterial systems it affects is highly variable among individuals. What’s dangerous about atherosclerosis is that it rarely gives a warning. You may not know you are at risk for a mild heart attack or mini-stroke until it happens. Many people don’t get even this warning. They go from feeling fine to suddenly sustaining a major stroke or heart attack.

Thermography can prevent this atherosclerotic ambush. It helps us identify those people at risk for heart attack or stroke early enough so that effective, noninvasive corrective actions can be taken. Thermography enabled us to monitor Henry’s progress during chelation therapy. First it showed us that Henry was at high risk of having a heart attack or stroke, then later it showed us that his risk was significantly reduced.

Henry’s case highlights the advantages of thermography as a diagnostic tool for heart disease. It is objective, quantitative, completely safe, and highly reliable. In fact, even if you are not at risk for a stroke or heart attack, thermography can detect the earliest signs of atherosclerosis, long before it becomes a problem; this advance warning can enable you to prevent serious heart disease from ever developing.

Bypass Surgery and Angioplasty Don’t Extend Life: Studies have shown that there is no particular difference in survival between those who opted for these procedures and those who did not. Specifically, a report in the New England Journal of Medicine (May 1997) showed the ineffectiveness of most angioplasty procedures and bypass surgeries to extend life following a heart attack. Scientists at the University of Toronto in Ontario, Canada, studied the death rates for 224,258 U.S. and 9,444 Canadian heart patients. They found that at the end of one year following the heart attack, the death rate was 34% in both countries. The crucial difference, however, is that whereas 12% of U.S. heart attack patients received angioplasty, only 1.5% of Canadian heart patients did; further, while 11.7% of American heart patients had bypass surgery, only 1.5% of Canadians did.

How Thermography Reads Heat Emissions
The use of thermography for medical imaging began in 1962, as a civilian offshoot of high technology re-mote imaging from space-surveillance-by the military. Today, a typical thermographic unit for clinical use costs around $75,000.

The detection of early breast cancer was thermography’s first medical use. In fact, between 1974 and 1976, the National Institutes of Health (NIH) required the use of thermography in their large-scale, breast cancer detection project. But as complete diagnostic criteria were undeveloped at the time they emerged after 1976 – the NIH dropped thermography from its program and radiologists shifted all their attention to mammography.

Thermography measures the amount of body heat in targeted areas-such as the breast-as derived from metabolism and as delivered by blood flow. Skin temperature is a reflection of the quality of blood flow in that area.

The thermography device converts heat energy emissions into electronic video signals displayed on a computer monitor. Up to 64,000 different points on the body are scanned in a single displayed image, each point representing about one square millimeter (1 mm=.04 inches). The thermography device does not send out rays to penetrate body tissue to produce an image. It simply registers infrared or electromagnetic energy naturally and continuously emitted from the body. Unlike mammography, which produces an X ray of the breast’s internal structure, thermography takes a picture (graph) of the infrared energy (thermo) given off during the body’s metabolic processes. While X rays give a structural view (what the body looks like internally), thermography gives us a functional perspective based on physiology (what the tissue is doing in terms of different metabolic rates).

By studying the infrared emission patterns from the patient’s body, the diagnostician has a direct index of the metabolic activity in the various parts of the body. Disturbances in the energy-conversion processes and reduced blood flow show up in the thermography scan as darker areas. Subsequent thermography scans can monitor and demonstrate the progress of treatments as the darker areas become lighter.