MB was referred to have a thermal image following pain and oedema in the right calf.

An ultrasonic investigation revealed thrombus formation in the short saphenous vein of the lower right leg. It was categorically stated that this was not a case of DVT. A course of aspirin was tried by her doctor after taking into account the ultrasound and thermal images.

In the first image set, the saphenous hyperthermic trace is strong and clear.

The event region demonstrates an asymmetry of 1.95° C, and a general regional difference of 1.5° C. Following 24 days using the aspirin, the following images were ordered to determine the efficacy of the treatment protocol. 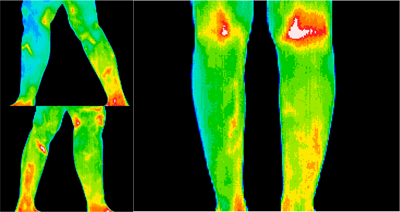 In this series, the event asymmetry had reduced to 1.11° C and the regional asymmetry to 0.85° C, confirming the fact that the phenomena was altering substantially.